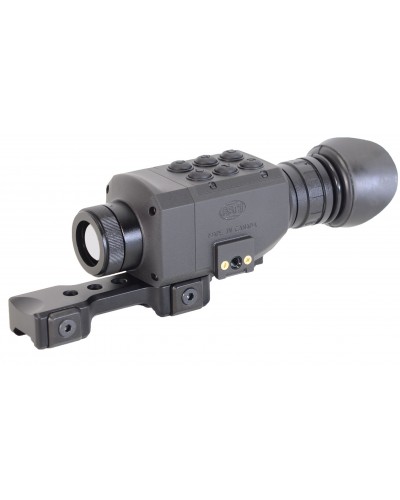 TWS-3000 can be supplied with various high quality and fast germanium lenses featuring optical magnification from 1X and up to 4X, as well as a low F-Number, achieving impressive detection and recognition range.

While most rival systems have FPA format 320x240, 9-30Hz, GSCI's TWS-3000 series scopes offer FPAs with 384x288 as the minimum requirement option, and FPAs with 640x480 as the top notch option. Such an increase of resolution and frame rate provides the user with a smoother-looking image, and clearer detail during increased shading/gradation. The user of TWS-3000 series scopes say it really makes a difference. Frame rate lag is nearly zero during quick panning and tracking of fast-moving objects.

TWS-3000 is supplied with 16 selectable patterns of reticles and standard M1913 Picatinny mount. In addition to that, reticle coordinates may be memorized which allows using the very same scope mounted on various guns or by various users.

Add the fact that these units cost several thousands less than the "government purchase only" devices and are available as a commercial version to general public, it is clear that TWS-3000 is a winner!